Minecoins are the main currency in Illuna. One gold ingot worth 2 minecoins, since you can smelt a gold block into 2 minecoin blocks. Visit the Illuna market to see the pricing of items! However, there are many shops that sell the same items for cheaper. Next to the minecoin there is the minenith, where nine minenith can be crafted to one minecoin. Both can be found as ores minecoin_in_ground and minenith_in_ground, which drop minecoins and coin base. The coin base can be smelted into mineniths. 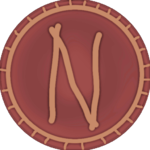 You may get noobcoins when you first join the server. Thats the only way to obtain noobcoins, or buy it from other player's shop. They are useful to buy some items as a start right at spawn. There is no official exchange rate to noobcoins, but most people tend to trade as: 1 noobcoin worth's 4-5 minecoin. It is only because people collect the rare noobcoins, not because you can buy better stuff with it.

The free services of the Illuna world are in reality not free. Running the powerful server for example, costs money. If you appreciate all of the work for Illuna and want/can to ensure its uptime, you can donate here. As a 'thank you', you can get Donorcoins for your donation. According to an Illuna forum post from Milan in Oktober 2016, you can get one donorcoin for a donation of 20ct (EUR). At some events and for contributing it's also possible to gather a few Donorcoins. The official exchange rate at the market is: one Donorcoin is worth 1000 Minecoins.

Retrieved from "https://wiki.illuna-minetest.tk/index.php?title=Currencies&oldid=211"
This page was last edited on 27 May 2020, at 19:25.
Content is available under Creative Commons „Namensnennung – nicht kommerziell – Weitergabe unter gleichen Bedingungen“ unless otherwise noted.
Privacy policy
About The Wiki of Illuna
Disclaimers