From The Wiki of Illuna
Jump to:navigation, search 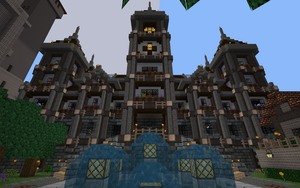 Our first flagship-server, it was a medieval-themed, yet advanced world with a ton of mods based on trust and big moderation effort. It was discontinued in favor of TechEth, because people didn't want to have signup-hurdles, and often didn't trust our approach without protection or areas. The world became mostly abandoned. Official post in our forum.

Important: if you have been a VIP-player, get your buildings migrated to TechEth! Just ask a team-member and we will arrange it!

This world had its predefined 128px texturepack, mostly created by our player Coeseta. Check out the BorderlandsRemix-texturepack on Gitlab.

Over the time, we had a number of Youtubers playing on this server: 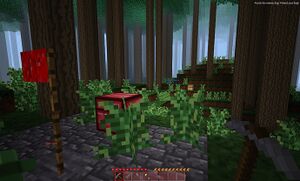 A Capture the Flag-server, where we used a super fancy area in the special TechEth-Mapgen together with our beautiful Redwood-forest, where people could even sniper and climb through the trees.

It was discontinued because the trees have been too heavy on peoples graphicscards, and even with many tweaks to the biome and the nodes, the smartphone-kids still ran into heavy client-lag, blamed it on the server and never really used it. 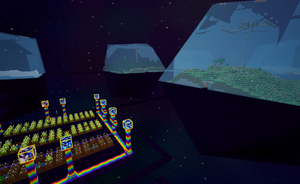 A world entirely in space? Hell yes. However it never really took off and was later discontinued to focus on our flagship-server. We use the Loud Walking mod for the top-layer of our TechEth-Server now.

Retrieved from "https://wiki.illuna-minetest.tk/index.php?title=Old_servers&oldid=105"
This page was last edited on 22 May 2020, at 20:21.
Content is available under Creative Commons „Namensnennung – nicht kommerziell – Weitergabe unter gleichen Bedingungen“ unless otherwise noted.
Privacy policy
About The Wiki of Illuna
Disclaimers